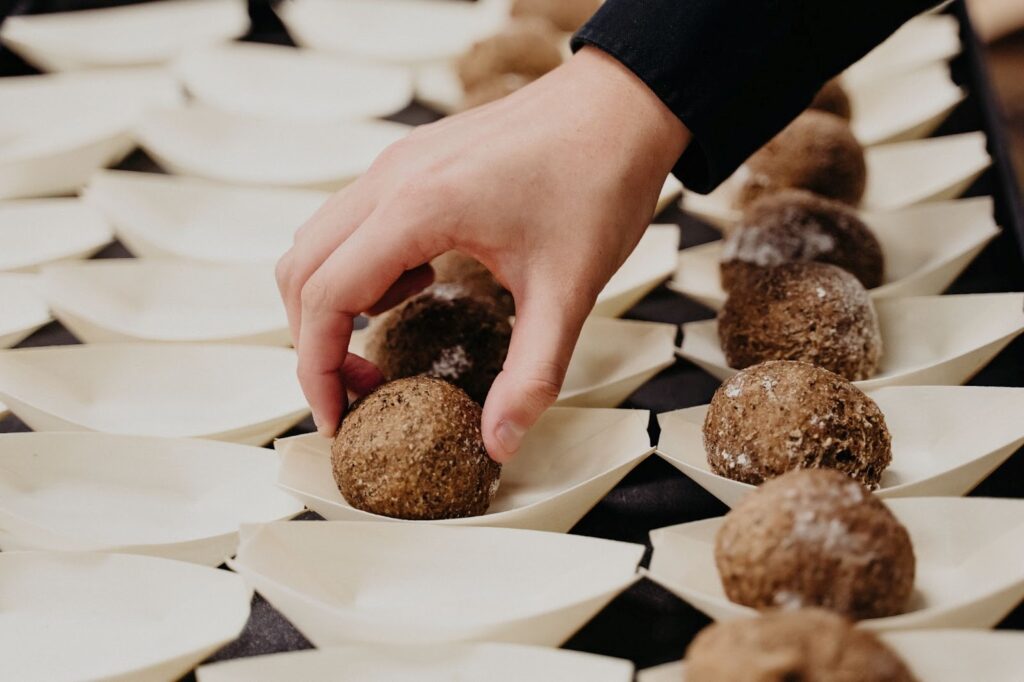 Authors: Will Tait and Jodi Newcombe

There’s an area of grassland on Parkside Run Farm that’s never been treated with chemicals. Carly Noble cuts and bales what grows there, and feeds it to her animals. She notices that they don’t sniff at it suspiciously like they do with a bale that’s been grown in soil treated with chemicals. Instead they dive straight in and eat every last morsel. Delicious are the fruits of untouched soil, it seems. Carly points out that CSIRO has done the research: it can take 60 years for the residue to disappear from a soil that has been heavily impacted by chemicals, so this patch of untreated land represents something special. She is thinking of growing a range of native seeds here that can be milled and distributed to boutique makers – from bakers to brewers – that are showing an ever-increasing thirst for diversity and pristine provenance. She’s not sure which seeds to trial.

Dja Dja Wurrung woman Bec Phillips has been taking in the stories and the landscape. As we described in our opening blog of this series, Carly has invited us to walk the land with her and see what insights emerge through observation and conversation. Bec suggests that a cool burn might show Carly the way forward, and that Djandak – the business arm of Dja Dja Wurrung Clans Aboriginal Corporation (DDWCAC) – would be the ones to approach to conduct it in the right way. You never know what native seeds might already be in the soil that would spring up after a fire. And what pops up can be your guide, because if it’s already growing here, then it’s supposed to be here – it’s the seed that grows in this land.

This one little exchange represents the exciting potential that dialogue between Traditional Owners and primary producers can generate. Of course, Indigenous Australians can be primary producers too. Black Duck Foods’s farming trials near Mallacoota NSW are leading the national conversation around what kind of native grain production we can have at scale in Australia. Driving this venture is the dream vision of those vast pre-colonisation fields of agriculture, that were documented by early settlers before slipping into “convenient” cultural oblivion.

At the recent 24th Symposium of Australian Gastronomy held in Bendigo, Black Duck Foods served up bread made with European and native grains together, an interesting twist on intercultural dialogue that breaks the impasse of ‘Either/Or’ to ask: “What if it’s both?”  The fact is that this kind of cultural and culinary coming-together is fundamental to the project of bringing these grains back into circulation. Although we now know that the Indigenous people of this continent were the first bread makers in the world, there’s so much knowledge lost about how those grains were actually turned into bread. And sometimes the crumbs that remain are tucked away in farmstead recipe books, like that of Carly’s grandmother which contains a recipe for wattleseed damper.

Figuring out new ways to do this starts with getting these grains back into people’s mouths. However, it’s not about simply plugging them as primary produce into the channels of our existing food industry. In a creative development session for Djakitj Larr,Bec helped the rest of the team consider how our connection to where we are is affected by where our food has grown. After all, “we are what we eat”. When what’s in our bellies is mostly from Argentina, China and California, with a substrate of Interstate, it’s like we have umbilical cords reaching out from within us to all of those places. The cord that connects us to the Country we’re on can get lost and confused amongst so many belongings. So having Black Duck bread on side plates across the nation’s restaurants will advance the conversation around native grains, but if part of eating Country healthy is being in relationship with the land and what comes from it, then the balance of our tastes and sources need to tip dramatically towards the localIt is therefore very good news for those of us that live and work on Djaara Country that ventures like grAiNZ, the Harcourt Indigenous Foodfarm Project and Djandak Dja Kunditja Kangaroo Grass Project are starting to reintroduce native grains locally. And who knows, perhaps Carly is just one of many farmers across the region that are on the verge of stepping in to play a part in this too.

The late, and much-loved John Reid of Redbeard Bakery in Trentham was a central figure in grAiNZ. His passion for reintroducing native grains was part of a holistic approach to food production that considers the wellbeing of people and place in every aspect of design and delivery. In an interview on Saltbush Podcast before he passed, John described the old system across Australia, that lasted from colonial times to the mid 20th Century, of small village bakeries with their own brick, wood-fired “Scotch” ovens supplying the community around them. This system was eradicated in the 1950s and 60s by big commercial baking interests who bought up every single one of those ovens, at above market value, and put them out of action. It was John’s discovery that Trentham’s Scotch oven had been restored and was available for lease that got Redbeard Bakery started. Built over 120 years ago, and still going strong, Redbeard’s oven is a rescued embodiment of the remnants of place-based community-serving technology that lay buried in the bulldozed wake of our globalised economic system. Which raises the question, how do we get our mainstream culture – obsessed as it is with ‘onwards and upwards’ – to stop and find value in treasures that we’ve left behind?

Zooming out we see that these dialogues and ventures constitute a handful of pieces in a vast and tricky puzzle, one that has been shaped in the image of the modern industrial economy, and throws up huge barriers to any approach based on the health of land and community and on cultural knowledge of Country. For as long as most of us can remember, the supermarket model has dominated our collective consciousness around food. As consumers we have long since been trained to desire and expect every possible ingredient, at any given time, at the lowest possible price. Meanwhile backstage, the few of us that are primary producers have been largely at the mercy of the international industrial supply machine that delivers this dazzling miracle.

The general public are steadily gaining consciousness of the impacts of this system on both sides of the equation. Perhaps the most pernicious and ingrained effect on all of us has been that of dislocation, an erosion of the significance and tangible experience of ‘being located’. Producers have found themselves locked into commercial relationships that syphon off the wealth of their land to a faceless, rootless “world”. Meanwhile most consumers can only conceive of a single source for their sustenance: the “no-place” that extends seamlessly from TV commercial-land to the neatly curated aisles of the supermarket. Meanwhile in the murk of these transactions, forests are felled, ecosystems degraded, workers exploited, greenhouse gases belched.

Most of us know this story now, but it’s still happening ‘elsewhere’. Reconfiguring these flows in a way that reconnects and re-locates consumers and producers, that ignites a worldwide appetite to eat food grown respectfully in place, may be the most significant thing that humans do in this time of transition to put ourselves on a path of regeneration. It can feel like every step on that path is thwarted by the behemoth system. However, every time we are stopped in our tracks we get to ask questions. Ask the right ones, and we step forward again.

Redbeard Bakery represents just a tiny crumb of the expanding global loaf of artisanal bread production, but the new era, old-style baked-goods this resurgence produces are not affordable to all. Those of us that can afford to spend the extra on locally-made regeneratively-sourced multigrain sourdough might not like to consider the fact that we are in a lucky bubble, but that’s where we are. So we’re actually facing a big, systemic economic conundrum here: to establish the localisation that we need, requires a vibrant, equitable local economy that everyone can access – how do we achieve that?

Well perhaps we eat our way there? In this blog we’ve invited you to break bread with us. Part of that might be breaking what bread has become, along with all of its supermarket friends, creating cracks for other ingredients and approaches to come through. Part of it is breaking our assumptions about this cherished staple: bread was actually born here, within the cultures of this continent. Let’s find out what that means, how we can honour and celebrate that fact. Breaking bread is of course also about sharing food together, and to us this feels like the surest step forward. We’re not going to transform the food system by just talking about it. Somewhere between our taste buds and our bellies, and the warmth of gathering to satisfy them, is where we’ll find the questions that really propel us into eating Djaara Country healthy. And as you sit back and digest all of this, perhaps allow some of the dreamier questions to float up: is there a patch of your internal grasslands that remains untainted by the machinations of modern life? What seeds might sprout from your soul-soil with some appropriate clearing and tending?

In the next two blogs we’ll be following the potential fates of four more protagonist foodstuffs as they are chopped, sliced and strained during our Bar Midland conversation with Carly Noble and her network of primary producers. All plated, of course, with a healthy serving of questions to tease out all of those tasty “where nexts”.  In the meantime please join the conversation by getting involved in the comments section below, and – as a teaser for our next blog post – have a (visual) snack on an amuse-bouche that featured in our Bar Midland session…

On Wednesday, July 13th, 2022, 42 landholders came together in Huntly Memorial…

Artisan, gourmet, pure and organic: the Loddon Valley is rich with unique,…